According to the 2019 Global Peace Index provided by the Institute of Economics and Peace (IEP), Iceland is No.1 while Japan 9th and the United States 128th in peacefulness. IEP is headquartered in Sydney, with offices in New York, The Hague, Mexico City, Brussels and Harare. It provides a snapshot of the global state of peacefulness among 164 countries. For more information visit www.economicsandpeace.org 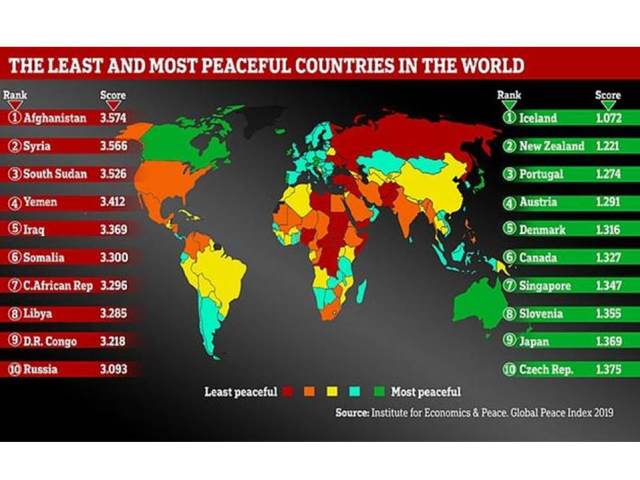 This is the thirteenth edition of the Global Peace Index (GPI) compiled by the Institute for Economics and Peace. It ranks 163 independent states and territories according to their level of peacefulness. Produced by the Institute for Economics and Peace (IEP), the GPI is the world’s leading measure of global peacefulness. This report presents the most comprehensive data-driven analysis to date on peace, its economic value, trends, and how to develop peaceful societies.
The GPI covers 99.7 per cent of the world’s population, using 23 qualitative and quantitative indicators from highly respected sources, and measures the state of peace using three thematic domains: the level of Societal Safety and Security; the extent of Ongoing Domestic and International Conflict; and the degree of Militarisation.

The results this year show that the average level of global peacefulness improved very slightly in the 2019 GPI. This is the first time the index has improved in five years. The average country score improved by 0.09 per cent, with 86 countries improving, and 76 recording deteriorations. The 2019 GPI reveals a world in which the conflicts and crises that emerged in the past decade have begun to abate, but new tensions within and between nations have emerged.

Iceland remains the most peaceful country in the world, a position it has held since 2008. It is joined at the top of the index by New Zealand, Austria, Portugal, and Denmark. Bhutan has recorded the largest improvement of any country in the top 20, rising 43 places in the last 12 years.

Four of the nine regions in the world became more peaceful over the past year. The greatest increase in peacefulness occurred in the Russia and Eurasia region, followed by the Middle East and North Africa. In both of these regions, the number of deaths from conflict declined, owing to the de-escalation of violence in Ukraine and Syria respectively. The fall in conflict deaths has been mirrored by a fall in deaths from terrorism.

All three regions in the Americas recorded a deterioration in peacefulness in the 2019 GPI, with Central America and the Caribbean showing the largest deteriorations, followed by South America, and then North America. Increasing political instability has been an issue across all three regions, exemplified by the violent unrest seen in Nicaragua and Venezuela, and growing political polarisation in Brazil and the United States.

Two of the three GPI domains deteriorated over the past decade, with Ongoing Conflict deteriorating by 8.69 per cent and Safety and Security deteriorating by 4.02 per cent. Terrorism and internal conflict have been the greatest contributors to the global deterioration in peacefulness. One hundred and four countries recorded increased terrorist activity, while only 38 improved, and the total number of conflict deaths increased by 140 per cent between 2006 and 2017.

However, contrary to public perception, the Militarisation domain has recorded a 2.6 per cent improvement since 2008. The number of armed services personnel per 100,000 people has fallen in 117 countries, and military expenditure as a percentage of GDP fell in 98 countries, with only 63 countries increasing their spending.

Perceptions of peacefulness have increased in some areas but decreased in others. More people across the world now feel that they have more freedom in life, are more satisfied with life, and are treated with more respect than in 2008. Many more people also feel that their countries are better places to live for ethnic and religious minorities. However, daily feelings of sadness, worry, and stress have also increased over the same time period.

Dealing with these negative trends in peacefulness becomes even more crucial when looking at the potential impact of climate change on peace. An estimated 971 million people live in areas with high or very high climate change exposure. Of this number, 400 million (41 per cent) reside in countries which already have low levels of peacefulness.

Climate change can indirectly increase the likelihood of violent conflict through its impacts on resource availability, livelihood, security and migration. In order to address these challenges, there will need to be much greater cooperation both within and between countries. Countries with high levels of Positive Peace are better able to manage climate-induced shocks and tend to have higher environmental performance than those with lower levels of Positive Peace.
The economic impact of violence on the global economy in 2018 was $14.1 trillion in purchasing power parity (PPP) terms. This figure is equivalent to 11.2 per cent of the world’s economic activity (gross world product) or $1,853 for every person. The economic impact of violence improved by 3.3 per cent during 2018. The greatest improvement was in Armed Conflict, which decreased by 29 per cent to $672 billion, owing to a fall in the intensity of conflict in Syria, Colombia and Ukraine. There was also a substantial reduction in the economic impact of terrorism, which fell by 48 per cent from 2017 to 2018.

Violence continues to have a significant impact on economic performance around the globe. In the ten countries most affected by violence, the average economic cost of violence was equivalent to 35 per cent of GDP, compared to just 3.3 per cent in the countries least affected by violence. Syria, Afghanistan and the Central African Republic incurred the largest economic cost of violence in 2018 as a percentage of their GDP, equivalent to 67, 47 and 42 per cent of GDP, respectively.

Some countries score much higher on the GPI than their Positive Peace score would indicate. This is known as a Positive Peace deficit, and research has shown that these countries are more likely to have increased levels of violence in the future, because they lack the necessary attitudes, institutions and structures to prevent violence from breaking out once the country receives a shock.

Some pillars of Positive Peace exhibit tipping points. Small improvements or deteriorations in Positive Peace can trigger large increases or decreases in their GPI scores. This tipping point can be seen when looking at the relationship between corruption, economic growth, inequality, and the GPI’s Safety and Security domain.

The report also finds that Positive Peace is dynamically associated with economic development. There is a strong correlation between changes in the Positive Peace Index and GDP growth between 2005 and 2018. Greater household consumption is a key reason for the link between improvements in Positive Peace and economic performance. Households are particularly helped by improvements in public administration.

On the production side, business activity responds particularly well to improvements in public administration and attempts to curb corruption. Services and construction are particularly responsive to improvements in Positive Peace. Manufacturing and agriculture are less responsive, especially in countries outside of the Organisation for Economic Cooperation and Development (OECD) and the Brazil.