At the ACUNS Annual Conference held in New York, Huang He, Deputy D-G of UN Association of China, explained how China had achieved seven out of eight MDGs.

First, China placed economic development as the top national priority and took seriously the achievement of the Millennium Development Goals (MDGs). Secondly, the Chinese Government formulated national development strategies for achieving the MDGs, built legal and institutional system and ensured full participation of the people. Thirdly, China took as the starting point and the ultimate goal of its development social fairness, justice, and improvement of people’s lives. Finally, the Government strengthened its dialogue and consultations with other countries and international organizations.

Mr. Huang He also noted that, with the inception of the 2030 SDGs, China would now incorporate the SDGs into its 13th Five Year Plan. He said China would eradicate poverty and hunger by promoting inclusive economic growth and social progress. He reported that China would also safeguard fairness and justice as well as enhance ecological conservation. China, he added, would continue to actively take part in global development cooperation. 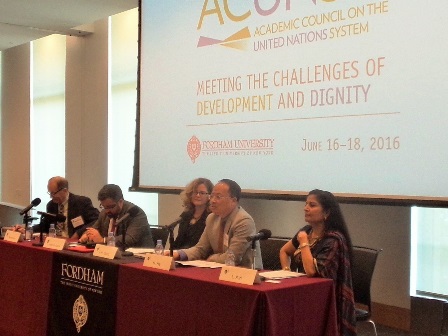 The following is the full text of Huang He’s presentation.

Over the past 15 years, China made remarkable achievements in realizing MDGs. Among the 8 Goals, China has met or basically met 7 with 1 left unfulfilled (Target 7B). Between 1990 and 2011, China lifted 439 million people out of poverty and became the first developing country that achieved poverty reduction goals of the MDGs. Since 2000, China has provided safe drinking water to additional 467 million rural residents. China achieved the goal to keep the net enrollment rate above 99% for both boys and girls at primary school age.

As a developing country with a per capita GDP of 8,000 USD, China achieved these goals because of the following reasons:

First, China places economic development as the top priority. There is no ideologically polarized debate in China, and both the government and the people aim only at increasing the productivity and promoting economic and social development.

In 1978, China reformed its agricultural system. In 1998, China reformed its industrial system. The reforms greatly improved the productivity. Today, China feeds nearly 20 percent of the world’s population with less than 10 percent of world’s arable land, and China achieved the Goal of halving the proportion of poor people 2 years ahead of the schedule. Meanwhile, China has the most complete industrial sectors in the world. Without China, maybe it’s a little difficult for you to enjoy the inexpensive high-quality products.

China formulates a five-year development plan every five years, and we incorporated the implementation of the MDGs into its 10th, 11th and 12th five year plan, which set the roadmap and measurable objectives to achieve the MDGs.

Meanwhile, China promulgated dozens of laws and specific plans for development, such as the Law on Compulsory Education, Law on Protection of Women’s Rights and Interests, Outline for Development-oriented Poverty Reduction for China’s Rural Areas and National Action Plan for the Development of the Women in China, among others.

All the Ministries and local governments carried out the five year plan accordingly and observed the laws strictly. In the meantime, lots of NGOs also participated in the legislative and planning process of development on a wide range. These measures provided crucial legal and institutional guarantee to achieve the MDGs.

Third, China takes social fairness, justice, and improvement of people’s lives as the starting point and ultimate goal of its development. As I mentioned, China made great success in alleviating poverty and hunger in the process of achieving the MDGs. In addition, China took education as a foundation for development and achieved universal access to nine-year compulsory education. In 2015, China produced 7.49 million college graduates, 7 times more than the year of 2001.

Over the past 15 years, the total investment in medical and health care in China was on rise, and child and maternal mortality rate significantly reduced. Notable progress was also made in curbing epidemic diseases such as HIV/AIDS and tuberculosis.

At the same time, China provided support and assistance to more than 120 developing countries to help them achieve MDGs under the framework of South-South Cooperation. According to the White Papers of Chinese Foreign Aid of 2011 and 2014, by the end of 2009, China had provided a total of 256.29 billion Yuan (400 million USD) in aid to other developing countries. From 2010 to 2012, China provided a total amount of 89.34 billion Yuan (14 billion USD) for foreign assistance.

China is still a developing country and is in the process of industrialization and urbanization. Unbalanced development between rural and urban regions, between coastal and land-locked regions, are outstanding. Environment degradation and climate change will also constitute big challenges. Now that we have the 2030 Agenda for Sustainable Development, which is an upgraded version of the MDGs, China will continue to take vigorous measures to realize the SDGs on time.

First, China has incorporated the SDGs into its 13th Five-Year Plan. The setting and implementation of SDGs conforms to the fundamental and long-term interests of China and China has aligned its own development strategy including the 13th Five-Year Plan and other domestic development strategies with SDGs to promote domestic reforms and formulate proper domestic sustainable development index system. Through SDGs, China will encourage firms to transform production pattern and follow a green path of industrialization. For this purpose, China has already established a domestic coordination mechanism which involves 43 Ministries to perform their duties to strengthen cross-board policy coordination and adjust and improve the laws and regulations to provide legal and policy guarantee.

Second, eradicating poverty and hunger, promoting economic growth, comprehensively promoting social progress, and safeguarding fairness and justice, enhancing ecological conservation and promoting sustainable development, will be high on the list of priority in realizing the SDGs.

Third, accelerating the improvement of economic system and promoting inclusive growth are crucial. China needs to establish a systematic and sound ecological conservation system and to improve environmental governance and ecological rehabilitation systems.

Fourth, China will continue to actively take part in global development cooperation. China will deepen South-South cooperation and provide other developing countries with support in terms of finance, technology and capacity building to help them implement the 2030 Agenda and share China’s experience on development and poverty reduction with other developing countries.

China is making preparations for the establishment of Assistance Fund for South-South Cooperation, which will be put into operation as soon as possible. The Academy of South-South Cooperation and Development will be launched and start global enrollment later this year. The academy will provide developing countries with opportunities for doctoral degree and master degree education and short-term training and will serve as a platform for exchanging and sharing development experience. China has signed an agreement with the UN on the China-UN Peace and Development Fund. China will continue to carry on the Belt and Road Initiative and promote the Asian Infrastructure Investment Bank and the New BRICS Development Bank to play greater roles in and make contributions to global development. Chinese companies and NGOs are also encouraged to participate in all the above areas.

At last but not least, China’s experience will boils down to one thing: a strong government. The Chinese Government represents the people’s interests, instead of that of different interest groups. Both MDGs and SDGs involve the provision of public products such as infrastructure construction and improvement of the life quality of the people. These public areas are either unprofitable or take a long time before they can make profits. Hence, private companies are mostly unwilling to invest. In China, a strong government and state-owned enterprises can fully and effectively mobilize all kinds of resources to carry on the unprofitable projects, a clear division of work among all the sectors of the society, and thus greatly improve efficiency. This is the most important character that makes China different from other countries, and I believe other countries could learn a lot from China’s experience.