Panelists discussed the issues and challenges facing Japan, ascertained Japan’s comparative advantage, and recommended what Japan should do in future international peace cooperation.

The panel discussion was held by six experienced practitioners of peace keeping operations and moderated by Professor Akiko Fukushima of Aoyama Gakuin University. The panelists were from right to left: Akio Miyajima, Director-General of the Secretariat of the International Peace Cooperation Headquarters of Cabinet Office, Ryoichi Oriki, former Integrated Staff Director of the Japan Self-Defense Forces, Yasushi Akashi, former Under-Secretary-General and Special Representative of the Secretary-General of the United Nations for Cambodia, Sukehiro Hasegawa, former Special Representative of the Secretary-General for Timor-Leste, Yoshifumi Okamura, Ambassador for TICAD, UN Reform and Human Rights, and Toshiya Hoshino, Professor of Graduate School of Osaka University. 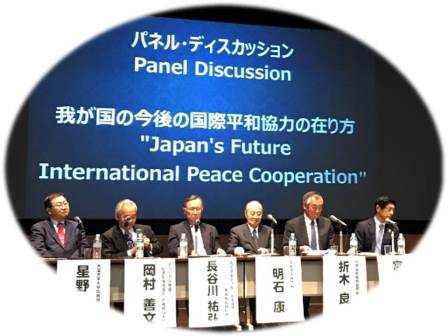 The followings are some of the key points made during the panel discussion on Japan`s future international peace cooperation. They are compiled mostly from a Japanese language summary of the panel discussion produced by the Secretariat of the International Peace Cooperation Headquarters of Cabinet Office, but do not constitute an official translation. The official Japanese summary text follows after the English text.

1. Issues and challenges in international peace cooperation of Japan

・ The issues and challenges in international peace cooperation of Japan come down to the authority to use weapons. As the mandate of the PKO has been transformed to include difficult and complicated tasks such as the protection of civilians, it has become difficult to make a judgment on maintenance of neutrality and use of weapons.

・ When the UN PKO mission is given a civilian protection mandate, the United Nations itself may need to use weapons to ensure justice and human rights. If the civilians on one side of opposing forces are exposed to threats, as in the case of Cote d’Ivoire and South Sudan, the United Nations could be placed in a difficult position as it may need to use weapons to protect those civilians. Under these circumstances, there is a need to thoroughly examine the relationship between the United Nations’ three principles of peacekeeping and the Japan’s five principles for participation (in PKO).

・ Although recent developments in Japan’s legislation to legalize “kaketsuke keigo” (coming to the aid of PKO-related individuals upon urgent requests when unexpected dangers are imminent) and “joint protection of camps”, there are still many issues to be solved. It is essential that the tasks should be implemented without imposing burdens on those on the ground. It is necessary for Japan to establish a national strategy on UN PKO properly, and to consider purposes and targets of the deployment, and the extent of commitment Japan should make, keeping in mind its national interest to protect when Japanese personnel are deployed.

・ The issues and challenges of the United Nations PKO include such issues as requiring long time to dispatch, low level of mobility and code of conduct, crisis management and preparation for civilian protection have been carried out on an ad hoc basis without proper coordination in advance. It can also be pointed out that consistency of activities among civil, military and police components in the UN mission and humanitarian development agencies are not sufficient, that medical units and facilities are immature, and that they rely too much on military means.

・ Since communications between the headquarters and field missions are indispensable in the United Nations, it is important to develop human resources who have knowledge and expertise that can make judgments with understanding positions of the headquarters and without making major mistakes in the field.

・ Even under the robust PKO mandate, construction/rehabilitation of infrastructure and logistics support that Japan is good at continue to be necessary.

・ We should be confident in Japanese quality of being well-disciplined to work properly and produce results. Capacity building of local staff, manufacturing, collaborative activities with Japanese ODA are also the strength of Japanese PKO.

・ Japan has advantages in the fields of technology, communications and operational capabilities, not only in software but also in hardware. Also, although it may take some time for Japan to take actual actions, it’s a distinct characteristics of Japan to carry out the work properly once we decide to do so.

・ We can be proud of the soft side of characteristics of the Japanese engineering units,  which constitute basis for their technological strength: undertaking work attentively, working and sweating together with local people instead of showing bossy attitude to them, and keeping things tidy and in order. The United Nations has also shown their interest for Japan to provide ecological expertise and new technologies such as drones.

・ Japan encourages local ownership (self-help efforts). In Asia, we have taken the approach of nurturing people and institutional frameworks to plant “seedlings of peace”, and we should fully make use of many experts with their know-how.

・ It is necessary for the Japanese general public to know both positive and negative sides of possibilities, limitations, and current situation of the PKO and to overcome the inward-looking pacifism and excessive cautiousness against unfound dangers. It is also important for the media to communicate the reality of hard work carried out by the PKO personnel in the field.

・ It is always important to constantly review the PKO Act (Act on Cooperation with United Nations Peacekeeping Operations and Other Operations), and the recent amendment of the PKO Act, which made it possible to dispatch personnel not only to UN PKO, but also to Internationally Coordinated Operations for Peace and Security is one of the examples of these reviews. In addition, activities related to peacebuilding and capacity building should be further expanded. For example, providing capacity building supports on a larger scale while focusing on specific areas could be an option. In addition to the SDF, it is necessary to elicit the cooperation in the field of civilian police including the utilization of ex-police officers, and the collaboration with ODA and NGOs. It is difficult to train and develop local military forces, but we may be able to expand activities to work on reform and development of security sector of local government.

・ It may be good idea for Japan to expand capacity building supports to emerging troop contributing countries, such as Cambodia. The capacity building project that Japan is currently working on in Africa to support rapid deployment of troops to the mission sites (African Rapid Deployment of Engineering Capabilities: ARDEC) has been highly appreciated. Moreover, Japan should further promote for Japanese civilian to occupy senior positions in the UN including field missions. Furthermore, establishment of United Nations PKO training center in Japan could also be an option.

・ Conflict analysis is important. Cooperation between academics and practitioners is crucial, as it is reckless to involve in conflict without proper analysis. It is also important to take a leading position for principles and philosophy as is the case with the concept of Human Security.

・ Since approximately sixty percent of UNMISS personnel in South Sudan have been dispatched from Asian countries, strengthening of capacity of Asian personnel will also contribute to Africa.

・ It is difficult to dispatch PKO personnel when there is no public understanding. Regarding the withdrawal of the Japanese engineering unit from South Sudan, it is pity that good stories, such as that the SDF personnel have a sense of fulfillment after completing the mission, have not been well reported while only the negative side such as situation of the mission field is dangerous or severe has been emphasized. It is important to explain to the Japanese general public in an easy-to-understand manner how participation in UN peace operations can enhance national interests of Japan and what are Japan’s unique strengths in PKO.

・ It is critically important for the Japanese general public to realize that peace and national interests of their own country can only be achieved within the global framework, not in the sole pursuit of Japan’s national interest or through Japan-First strategy in the world today.