According to Madeline Garlick, addressing challenges around protracted refugees, situation of conflict, finding solutions, responsibility sharing are key conditions for successful refugee protection. People fleeing from persecution should not be penalized for moving illegally. 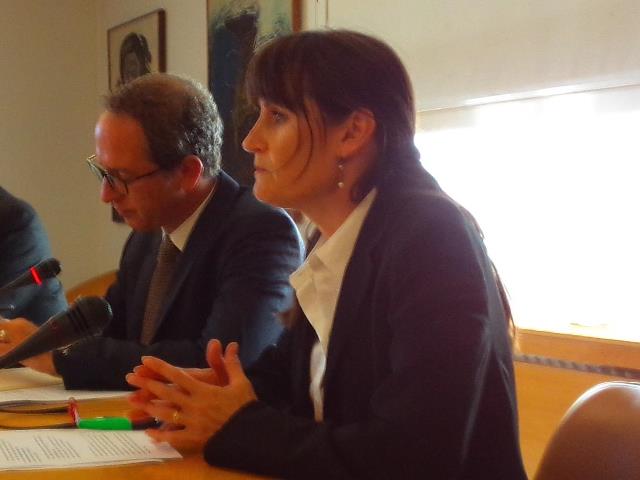 In her presentation, Dr. Madeline Garlick first quoted from Secretary-General António Guterres, who had been the United Nations High Commissioner for Refugees for ten years. In 2015, at a meeting of political leaders, he said: ‘We can’t deter people fleeing for their lives. They will come. The choice we have is how well we manage their arrival, and how humanely.’ She then noted that this highlights the fact that states make decisions on how they respond to the issue of refugees. A refugee under the 1951 Convention is defined as a person facing persecution because of his race, nationality, religion, membership of a particular social group or political opinion. A protocol has since expanded the scope of the refugee convention to removal any temporal limitation; and it applies in all regions of the world. Some principles are recognized as customary international law such as non-refoulement for people facing persecution, torture or inhuman or degrading treatment in their home country. Refugee protection is dealing with an exceptional situation in which states have failed to protect the human rights of their citizens in their own territory. It engages the responsibility of another state as people flee across borders. There are many refugees moving as well as people moving for other reasons such as fleeing natural disasters or looking for better economic opportunities. Many of these people are fleeing without legal title. They should not be penalized for moving illegally. Refugees are entitled to human rights but migrants are also entitled to human rights protection.

She mentioned four challenges that need to be addressed in to ensure effective responses for refugees: protracted refugee situations, situation of conflict, finding solutions, responsibility sharing. Protracted refugee situations are defined by UNHCR involved at least 25 000 people displaced for 5 years or more. Among 25 million refugees at the end of 2017, half had remained in a protracted situation while 3 million people have been displaced for 38 years or more. These phenomena are closely linked to the protracted nature of conflicts throughout the world. In 2017, scholars identified 55 conflicts raging worldwide. The world refugee population is now 50 percent higher than a decade ago. UNHCR had issued guidance for states on how to deal with refugees. Most people fleeing violence were likely to fall into the category of refugees. She added that refugee status was supposed to be temporary, but where protracted situations persist, there is a need for redoubled efforts to achieve solutions.

In that regard, UNHCR has identified three durable solutions: voluntary repatriation once substantial and durable change has taken place to permit refugees to return home; integration in the place where the refugees have been granted protection; and resettlement in a third party state. With the long-standing refugee population, there was an urgent need to achieve better access to solutions for refugees. She mentioned that 80 percent of refugees are hosted in developing countries and 63 percent of them in 10 countries alone with major burdens falling on countries like Turkey, Jordan and Lebanon, the last of which hosts 1 refugee for its population of 4 persons. She then mentioned the New York Declaration of September 2016 on the Global Compact for Refugees. It consisted of concrete proposals that aimed at bringing states together to discuss refugee issues. 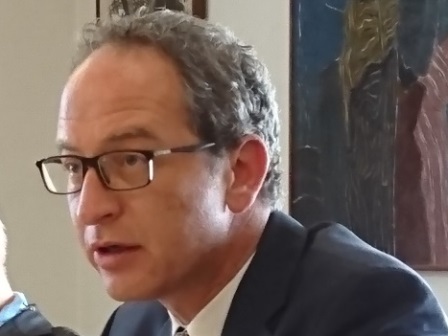 Following Dr. Madeline Garlick`s presentation, Mr. Karim Amer explained that geographically, the largest refugee crisis was taking place in Asia with Afghan and Rohingya refugees. Six million Afghan refugees were still in Iran and Pakistan for more than four decades. Now 5 million Afghan refugees were in Iran and Pakistan, roughly 2,4 million having some refugee protection and the others holding different types of status. They were trying to find out how they could develop a solidarity with Iran and Pakistan. Amer also mentioned the Myanmar-Bangladesh situation. Rohingya refugees who fled to Bangladesh reached almost one million by the end of last year, putting an extreme pressure on southern Bangladesh. The Government of Bangladesh has responded generously by keeping its borders open and the UNHCR has been attempting to provide for basic needs in the short term in anticipation of the monsoon season. They are also working with the Burmese government for a potential repatriation in the Rakhine state. Additionally, the World Bank had provided Bangladesh with a 480 million US dollar grant aid. She noted that the UNHCR was trying to support a broader solidarity approach with trade concessions for Bangladesh such as lowering trade tariffs. Traditional solutions remain such as resettlement but, she mentioned, the role of non-state actors and the private sector such as Uniqlo in Japan was emerging as promising. The academia should also play a larger role. 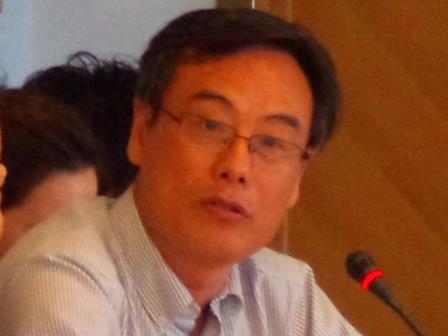 Following Madeline Garlick`s presentation, Professor Zhang Guihong, Director of the Center for UN Studies, Fudan University, and Vice President & Secretary-General of the Shanghai UN Research Association noted that China had a tradition of welcoming refugees. He mentioned China had protected more than 10,000 Jewish refugees in Shanghai and other areas in China during World War II. He pointed out the need for global governance for addressing the issue of refugees, and solving the root causes instead of just addressing the symptoms. He also noted the importance of the spirit of international cooperation as well as the principles of objectivity and neutrality. The Chinese perspective consisted of trying to prevent interference and political instrumentalization of refugees. The UN Secretary-General regarded the prevention of conflict as the top priority of the UN for his experience with refugee assistance. He asked if UNHCR had an active working relationship with UN bodies for on conflict prevention, for the need to institutionalize the global compact on refugees. 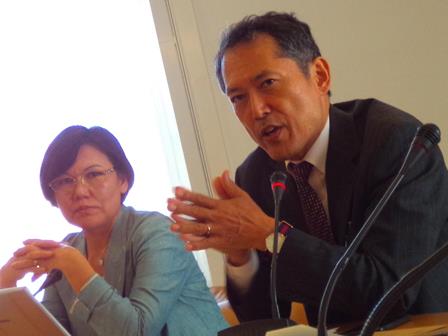 Professor Takaaki Mizuno of the Kanda University of International Studies referred to his own experience as an Asahi Shimbun reporter in East Asian refugee crises. In the late 70s, Japan faced humanitarian crisis for the first time. When war broke out in and around Vietnam and Cambodia, refugees fled to neighboring places and even reached Japan. The arrival of “boat people” posed a soul-searching problem for Japan because the Japanese had not had any experience before. While Japan needed to raise their attitude to the global standard, Japan has kept a very narrow view. Mizuno added that the sense of homogeneity was very strong in East Asia countries of Japan, China and Koreas. It is now a crucial moment because of the influx of people toward Europe. If refugees and migrants were mixed up as apples and oranges, there might be a confusion and backlash in treatment. A distinction should be made between refugees and migrants, while everyone must be treated decently. 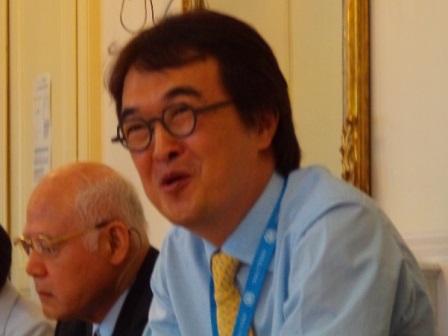 Professor Changrok Soh, Director of Human Rights Center of Korea University, found global initiatives were critically important. Refugee issue had not been of much concern in Korea for a long time. However, the recent arrival of refugees from Yemen in Jeju Island off the coast of Korea created fierce debate regarding their handling by the Government. The issue became politicized and newspapers constructed a negative image of refugees. South Korea might benefit from sharing information and knowledge gained from refugee handling in Japan as Europe. 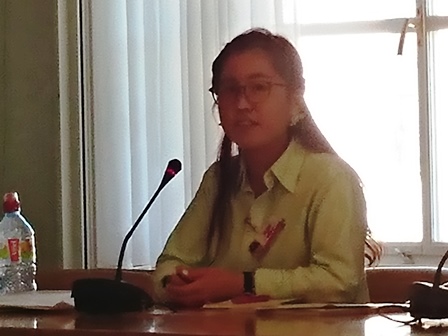 Ms. Reina Motegi, Student from the University of Tokyo indicated that only very few refugees had been accepted in Japan 2017 and they numbered only 20 in 2017. She thought the main problem lay in the political realm. Many people were aware the situation of refugees but were not concerned with it. Sadly, the refugee issue has not been a priority concern of the Japanese Government.

In response to the observations made by the commentators, Dr, Garlick stressed that academics could influence governments by their research and publication of their findings and recommendations. It was the stark fact that 40 million people are displaced within their own countries. UNHCR had been very active in a number of countries to provide assistance to internally displaced persons (IDPs). If the international community could help IDPs before they cross international borders, it could avert challenging refugee situations. As the role of conflict prevention and sustaining peace are important, UNHCR is working closely with other UN organizations, especially on peacebuilding in post-conflict countries.

Concerning the attitude of people in transit and asylum countries toward refugees, Dr. Garlick noted that in a number of countries there was an increased political rhetoric reflecting xenophobia. In Europe although political parties speak against refugees, many people have welcomed refugees. The movement of people across borders cannot be stopped; it thus needs to be managed more effectively.

While their concern was genuine and legitimate, the key to successful solution was to help states to respond to the arrival of refugees. She thought that states could collectively manage these refugee matters by looking historically at the contributions made by public and private institutions. There was tremendous opening for civil society to play a critical role.

Concerning the global compact on safely orderly migration, Dr. Garlick found the need to regard migrant crisis separately from refugee crisis. Refugees are treated already within an existing framework. She suggested that we should know what the migration compact would bring about and how states could share the responsibility of handling refugees as well as migrants. Camps were not a solution as refugees could contribute to the society. The assistance of the international community to education of refugees is critically important to help them find solutions; yet this is a question of resources, as 85 percent of them are not in the developed countries. Therefore, there is a need for solidarity among all nations to address challenges are that different in character. In Asia, there are now few camps except in the Bangladesh/Myanmar border region where there are challenges as well as opportunities.
In conclusion, Dr. Garlick stated that given the extent of tensions among communities, there is a need for comprehensive assistance not only to one community but all of them to achieve the goals of reconciliation and harmony among them.