Hasegawa calls for Asian participants to voice more actively their views and opinions at ACUNS meetings and contribute more to dialogue and mutual understandings across academics and practitioners of the world. 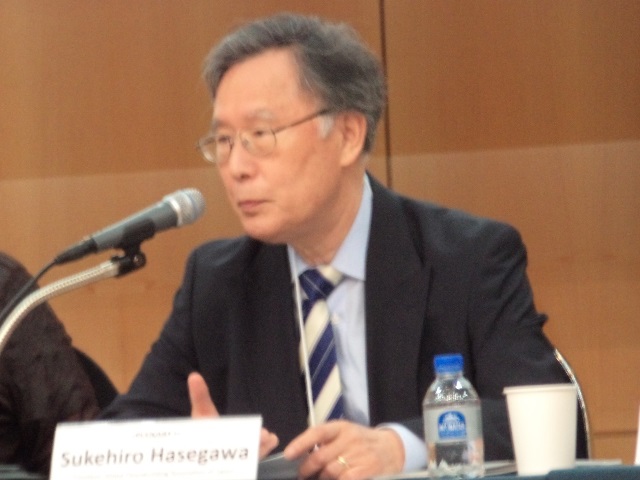 In his presentation at the first plenary session on retrospect and prospect of ACUNS` thirty year history, Sukehiro Hasegawa, President of the Global Peacebuilding Association of Japan, first explained how the three Asian academic councils emerged.

Japanese and Korean academic councils established in the late 1990`s. Japan Association for the UN Studies (JAUNS) and the Korean Academic Council on the UN System (KAKUNS) held its first seminar first in Seoul in 2001 and since then held mutual visits. In 2010, the UN Association of China sent a delegation to Seoul where KACUNS and JAUNS accepted Chinese participation that an academic institution be established. China established the Chinese Academic Net for United Nations Studies (CANUNS) and participated formally in the Asian Seminar on the UN System held in Osaka, Japan in 2011. It was also the first year when Alistair Edgar as ACUNS` Executive Director participated in the Asian Seminar on the UN System as an observer.

ACUNS was influential for the three Asian countries to the name of the Asian Seminar as the Asian Seminar on the UN System following the Academic Council on the UN System. East Asian academic interest followed the overall direction set globally by western scholars who are members of ACUNS and other institutions, and moved from globalization and global public goods, human rights, humanitarian assistance, human security, peacekeeping and peacebuilding, climate change and sustainable development. 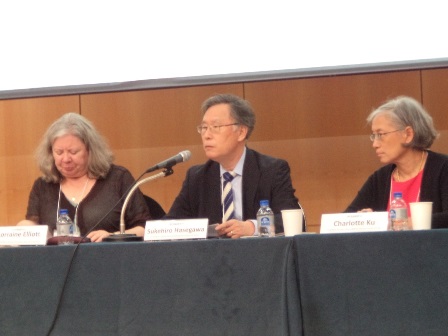 Hasegawa said the two East Asian academic councils, JAUNS and KACUNS started participating in ACUNS annual meetings twenty years ago. CANUNS started sending their members in 2015 to ACUNS` annual meetings along with JAUNS and KACUNS. Four Japanese, namely Professors Kunugi, Shimura, Uchida and Hasegawa served on the ACUNS Board of Directors and while two Koreans, Professor Sin-wha Lee and Eun-sook Chung. ACUNS established its liaison office in Tokyo two years ago in Tokyo and holding the first ACUNS Tokyo Forum meeting next week in Tokyo.

Concerning the prospect for the future of ACUNS engagement with East Asia, Hasegawa found challenges for the scholars of the three countries on how to address and achieve a common understanding of the historical issues, North Korea, the emergence of China as a superpower. Hasegawa still believed there was no doubt Asian group can expand their academic partnership geographically and substantively– Mongolia is the prime country, and Southeast Asian countries can also be considered for inclusion in our academic pursuit of excellence on the UN system. He referred to the East Asian Forum on UN Peace Operations which had been established three years ago and already met twice here in Seoul. Hasegawa also mentioned that university students and young scholars had met under the auspices of the three Associations of Japan, China and Korea and showed the courage and ability to address the historical issues and explore the possibilities for collaboration. In his view, the United Nations University and ACUNS should collaborate more in enhancing public awareness in Asia of what the UN is doing by expanding academic networks.

With regard to the philosophical contributions of Asian countries could make to ACUNS, Hasegawa found the emergence of the Trump presidency providing an opportunity to question the reliance in excessive nationalism in achieving national interest. America first was no stranger to Asian countries. Even today, the leaders of China, Japan and Korea was pursuing their national interest first – more and better than Trump. Yet, they have learned and multilateralism brings transparency and accountability on the global scale and create a win-win result in a long run.

Hasegawa then suggested that the responsibility of leaders to safeguard “truth” and “goodness” and exercise “virtues” in governance of society must be reinstituted as called for by Confucius (551-478 B.C) and Aristotle (384-322 B.C.) 150 years later. East Asian countries can contribute more to peace, security and development of the international community and the enhancement of ACUNS` intellectual horizon, by pointing out the need to balance individual freedom and social responsibility. To enable Asian people to contribute their ideas more to ACUNS, Hasegawa recommend that the number of seats on the Board of Directors of ACUNS be increased from one to two.