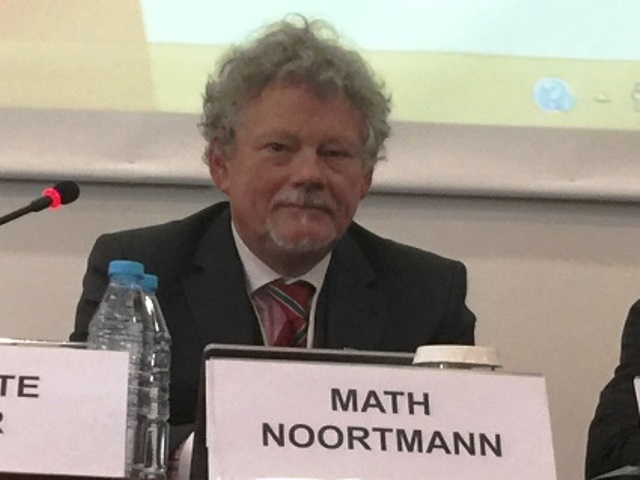 The seventh Istanbul Human Security Conference was held on the theme of ‘Human Security in Difficult Times’ from October 18 to 20, 2017 at Kadir Has University in Istanbul. The conference represented a close collaboration between the Centre for Trust, Peace and Social Relations (CTPSR) at Coventry University, the United Nations Human Security Unit and Kadir Has University. The conference explored how the concept and practice of human security is affected by critical political developments including the rise of nationalism, populism, mass migration and displacement. The conference also examined the roles and durability of many non-state armed groups, and the squeezing of civil society.

Dr. Math Noortmann, Professor in Transnational Law and Non-State Actors and a member of the Research Group on Securing Society the CTPSR, has recently been appointed as the next Executive Director of the Secretariat of the Academic Council on the United Nations System (ACUNS). He started his keynote speech with a quote from Bob Dylan to introduce his main argument:

Wise man lookin’ in a blade of grassYoung man lookin’ in the shadows that passPoor man lookin’ through painted glassFor dignity…Searchin’ high, searchin’ lowSearchin’ everywhere I knowAskin’ the cops wherever I goHave you seen dignity…So many roads, so much at stakeToo many dead ends, I’m at the edge of the lakeSometimes I wonder what it’s gonna takeTo find dignity(Bob Dylan 1989)

It is that relation between vulnerability and dignity that we have missed in our policies and publications. In my presentation, I will argue that we need to reread, reanalyze and reinterpret the articulation of ‘dignity’ in UN documents in relation to vulnerability. There is ample historical and current evidence that dignity is the first virtue to go whenever and wherever people are exposed to domination. The hammering of dignity is in my opinion the most serious indicator of more harm to come.

The articulation of ‘dignity’ in the Preamble of the 1945 UN Charter and subsequent pronunciations in other UN documents has triggered a discourse on dignity in law and the social sciences which is considered to ‘produce nothing but a confusion of [a] conceptual, normative and disciplinary’ kind. That confusion is not only caused by the incompatible ontologies that we hold but also by “the methodological problem of how we should go about identifying the meaning and function of dignity”. As human dignity has no definite, universal (normative) meaning across time and space, there is little practical value in pursuing that intellectual challenge. But there is all the more reason to understand and emphasize the functionality of dignity. So far, human dignity, as it appears in UN texts, has been subjected to an unqualified moral framing in human rights and/or human security. I submit that that framing is not grounded in a proper reading, analysis or interpretation of UN writings.

I propose that authoritative references to dignity in UN Documents have teleological value and more attention has to be paid to the context of the phrasing. As stated, I consider that the value of the articulation of dignity is to be found in it being instrumental to the profiling and highlighting of vulnerability. That specific prominence of dignity is lost if we either keep on conflating (human) dignity and a broader all-encompassing notion of human rights and /or if we keep postulating dignity as a constitutional element of human security. “Dignity’ must be reclaimed as an independent human value. Therefore, it must at the same time be “separate[d]” from human rights and salvaged from the potential “failure” of the concept human security. The two arguments will be developed separately based on the articulation of dignity in the UN Charter and UN human rights documents, and on UN human security documents respectively.

While it is certainly true that there is an “implicit commitment to dignity” in many texts, we might have interpreted that commitment to broadly and stretched its application to far. Considering human dignity as an equivalence to a set of universal human rights or a paradigmatic component of human security would not only be misinterpreting ‘dignity’, it would also seriously jeopardize its important functionality.