Speaking in English, he said “I call on all of us to rebuild trust toward the system for international trade. That should be a system that is fair, transparent, and effective in protecting IP (intellectual property) and also in such areas as e-commerce and government procurement.” 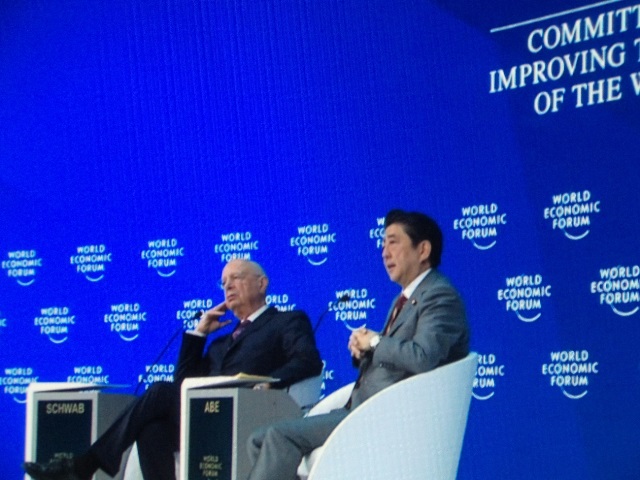 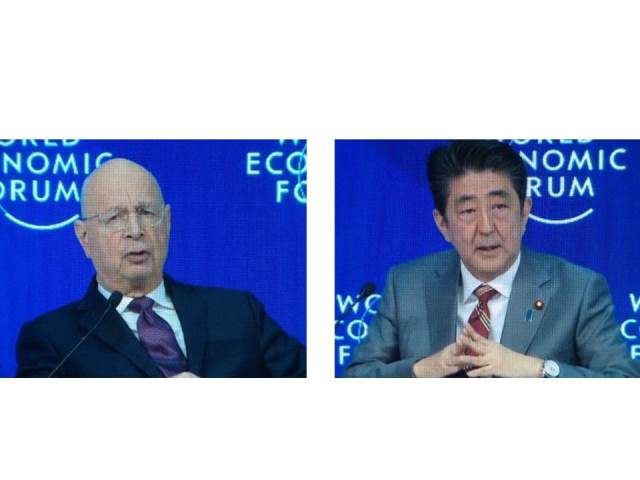 Thank you so much, Professor Schwab, and YES, it’s been 5 years since I was here last time. I am very much glad to be back.

On the 26th of December, 2012, I came back in office as Prime Minister. At that time in my country, we saw a tall wall,on which many “saw the writing,” thinking that Japan was doomed.
Japan was losing population. The population was ageing. Japan could NOT grow….Or so the argument went.

It was a wall of despair, a wall of Japan pessimism.

Since that time, our working-age population has dropped by 4.5 million people.
We have responded by pushing hard for “womenomics,” encouraging more, and then still more women to work, while lessening the burden women shoulder.

As a result, we now have 2 million more, repeat, two million more, women employed. The rate of female labor participation has hit 67 per cent, an all-time high for Japan, and higher than, say, in the U.S.

Meanwhile, the number of people over 65 still actively working has also increased by 2 million, thanks to our policies that enable them to keep working.

After each job seeker, you see more than one employer chasing, and that’s the same throughout the country, a picture never seen before.

Out of every100 college graduates looking to work, 98 find employment, also a record number.
Corporate Japan has responded by raising wages by 2 per cent, year on year, the highest rise since the beginning ofthe century, for five consecutive years.

As a result,during my six years in office, Japanese GDP has grown by 10.9 per cent, adding 490 billion U.S. dollars.

A long-awaited positive feedback cycle is taking root, with growth in employment and income generating greater demand and even more employment.

In order to make our growth long-lasting, we are encouraging investment, which will enhance productivity.

Recently, we made a new law, under which, for the next five years, as many as 340 thousand skilled workers will be invited to Japan from abroad.

How about the gap between the rich and the less affluent?

During my administration, the child relative poverty rate, which had never before gone down, did go down for the first time, and did so signifi-cantly.

Before my administration started, only 24 per cent of graduating high school seniors from single-parent homes went to college. Recent figures show that number has risen to 42. It will go up further, as we are going to expand our free education program from October this year onward.
We are not widening the gap. We are narrowing it.

Despair was wiped out by renewed hope. Hope, ladies and gentlemen, is the most important factor for growth. A country ageing CAN still grow as a “hope-driven economy.” May I now solemnly declare? Defeatism about Japan IS NOW defeated.

Now, later this year, in June, in Osaka, Japan, we will be hosting this year’s G20 Summit. Let us make it a chance to regain optimism for the future, providing re-assurance that it is possible to achieve a hope-driven economy.

As always, at that summit, we are going to discuss a range of issues. But today, I will focus on two big issues, only two.

First off, I would like Osaka G20 to be long remembered as the summit that started world-wide data governance. Let Osaka G20 set in train a new track for looking at data governance–call it the Osaka Track–under the roof of the WTO.

The time to do so is ripe, ladies and gentlemen, as we all know that for decades to come, it will be digital data driving our economy forward.

We had better act now, because coming into being every single day is more than 2.5 quintillion bytes of data, which is, according to one estimate, as much as two hundred fifty thousand times the printed material in the U.S.Library of Congress. A delay of one year means we will be light years behind.

We must, on one hand, be able to put our personal data and data embodying intellectual property, national security intelligence, and so on, under careful protection, while on the other hand, we must enable the free flow of medical, industrial, traffic and other most useful, non-personal, anonymous data to see no borders, repeat, no borders.

The regime we must build is one for D.F.F.T., Data Free Flow with Trust–non-personal data, needless to say.

In Society 5.0, it is no longer capital but data that connects and drives everything, helping to fill the gap between the rich and the less privileged.

Services of medicine and education, from elementary to tertiary, will reach small villages in the Sub Saharan region. Girls who have given up going to school will see, beyond their own village, a wider horizon where the sky is the limit.

Our task is obvious. We must make data a great gap buster.

Through AI, IoT and robotics, the data-driven Society 5.0 will bring about a new reality for urbanity. Our cities will be made much more livable for all sorts of people from all walks of life.

To that end, the promise I made 5 years ago still holds today, that I will continue to work as a drill bit, drilling right through outdated regulations to change them.

The engine for growth, if you think about it, is fueled no longer by gasoline, but more and more by digital data.

When we say, we need to change the WTO, we are still thinking about goods, agricultural or otherwise, for which distances and borders matter.

We have yet to catch up with the new reality, in which data drives everything, where the D.F.F.T., the Data Fee Flow with Trust, should top the agenda in our new economy.

In a sense, it’s all déjàvu. When John D. Rockefeller was building Standard Oil, no one knew what to do with gasoline. Dumped into the nearby Cuyahoga River, gasoline caused fires many times.
It took 3 to 4 decades before we humans came to know the value of gasoline. About 20 years into the twentieth century, gasoline was running cars and flying airplanes.

It is the same, isn’t it, about data. Around 1995, we started to use the Internet on a massive scale, but it was almost 20 years into the 21st century that we found data driving our economy.
Why not start the Osaka Track, and make it a very fast track?

It will be great if every one of us, from the U.S., Europe, Japan, China, and India, to leap frogging countries in Africa, share our efforts and our successes in breathing fresh life into the WTO.

In Osaka, here comes my second point, ladies and gentlemen, I would very much like to highlight what innovation does and how much innovation counts in tackling climate change, because, and this is an important “because,” we NEED disruptions.

To remind us of that, the IPCC, in its recent “1.5-degree report,” tells us that global net human-caused emissions of CO2 should reach “net zero” around 2050, meaning that any remaining emissions would need to be balanced out by removing CO2 from the air.

We must invite more and still more disruptive innovations before it’s too late.

CO2, ladies and gentlemen, could well be the best and most affordable resource for multiple uses.

There is artificial photosynthesis, for which a key discovery, one for photocatalysis, was made by Akira Fujishima, a Japanese scientist.

An old technology of methanation is getting attention anew to remove CO2.
It’s time now to think about CCU, Carbon Capture AND Utilization.
Hydrogen, as both a primary source, and more importantly, a carrier of energy, must become cheaper and more easily affordable.

My government is aiming to reduce the production cost of hydrogen by at least 90 per cent by the year 2050, to make it cheaper than natural gas.

We will be inviting to Japan topmost experts in science and technology from G20 member countries to combine forces in accelerating innovations.

I am also pleased to tell you that my government, first among others, published a guidance paper in December last year along with the TCFD, or Task Force on Climate-related Financial Disclosures.
ESG investment world-wide has grown over the last five years by more than 9 trillion US dollars.
That’s a big amount, but we must channel even more into green innovation. And the guideline we put together will help motivate more companies to spend greater amounts on disruptive innovations.
I must say that spending money for a green earth and a blue ocean, once deemed costly, is now a growth generator. Decarbonation and profit making can happen in tandem.

We policy makers must be held responsible to make it happen, as I will be stressing in Osaka this year.

At the deepest spot of the Pacific Ocean we now find something terrible going on.

The bodies of small sea fleas down at the bottom of the ocean hold toxic PCB contaminants in very high density. Some say that microplastics are the cause.

Again, in Osaka, I would like to build a shared sense that it takes a world-wide commitment not to increase but to reduce plastics flowing into the seas. There is absolutely no need to restrain our economic activities. Innovation, again, is what counts. Let us jump-start from Osaka toward world-wide action to that end.

My third and last point is about Japan’s commitment.

Japan is determined to preserve and committed to enhancing the free, open, and rules-based international order.

Ladies and gentlemen, I am so very much pleased and proud to tell you that on December 30, 2018, WE FINALLY BROUGHT TPP11 into effect.

Now, I must say, I am just as pleased and just as proud to make another announcement.
Effective the first of February, which is just around the corner, the EU-Japan Economic Partnership Agreement WILL ENTER INTO FORCE.

The entire world should benefit from the economies of scale and efficiencies these two mega deals will bring about.

I call on all of you, ladies and gentlemen, to rebuild trust toward the system for international trade.

That should be a system that is fair, transparent, and effective in protecting IPR and also in such areas as e-commerce and government procurement.

TPP11 and the EU-Japan EPA both aim at achieving those goals. Let us begin here.

The U.S., Europe, and Japan must join forces to facilitate changes within the WTO, especially its rules for government subsidies.

The Osaka Track, needless to say, will make the WTO more relevant in the age of the data-driven economy.

A new era coming to Japan

I said at the beginning, ladies and gentlemen, that hope matters more than anything when it comes to generating growth.

Hope, is about looking forward to tomorrow, next year, the year after next, and 10 or 20 years down the road.

Fortune has embraced my country. Events we are hosting over the next decade begin with this year’s G20 and rugby world cup and extend to Tokyo 2020 for the Olympics and Paralympics and to World Expo 2025, Osaka- Kansai.

Most importantly, this year, for the first time in as long as 200 years, His Majesty the Emperor of Ja-pan will abdicate and a new Emperor will take the throne.

It is the dawn of a new era.

Japan, now reinvigorated and revitalized, with your embrace, will continue to be one of the foremost open, democratic, and law-abiding contributors to peace and growth in the world.

Thank you so much.